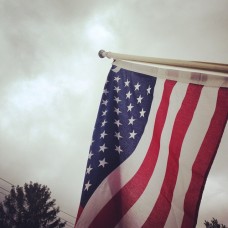 I’m not really a flag-waver. Oh, I once was, believe me. I used to sew American Flag patches on my jackets, I had a sign that read “dulce et decorum est pro patria mori” hanging over my desk, my biggest dream was to join what was then called the Navy underwater demolition team (UDT); it has since evolved into a unit known as the SEALs. Once, after being on assignment in Riyadh, Saudi Arabia for a period of seven months, I had to fly to the city of Jeddah on the Red Sea coast to visit the Brazilian embassy. On the way, I passed the American embassy which had our flag waving from the rooftop; it brought tears to my eyes.

As I got older, and hopefully a little wiser, I began to see signs of mold eating away at my country from the inside. I saw it in the way we were conducting foreign policy. I witnessed how my fellow countrymen acted while overseas, and it was often followed by a sense of embarrassment, especially since I was also witness to how people from other countries, notably European nations, behaved. My flag-waving desire began to wane. Quickly.

It hasn’t really gotten any better as the situation, especially our internal divide, gets worse. Having said that, I wrote a post about ISIS the other day. It naturally garnered some invective toward the United States. I found myself growing irritated over their comments, but answered each comment in defense of our nation. I think it has something to do with: it’s my country so I can make fun of it if I want to, but you can’t.

The irony of that is the myriad problems we face within our country makes me even angrier than it did before. Why? Because we need to be the best damned country on the planet, that’s why. We need to be the guys who wear the white hats like the old cowboy movies.

Is this a resurgence of my latent patriotism? Did it take the insults from people in other countries to stir my pot? Maybe, just maybe…