Astoria, New York has earned a reputation for its ubiquitous cafes and restaurants. In good weather, many offer outdoor seating similar to a European or New York City style of dining. Given today, the first Summer Sunday of the year, was warm and sunny, we decided to combine the need to walk our Old English Sheepdogs, Harry and Nana with brunch. They are well known around Astoria, with over 3,000 Facebook/Instagram followers, and we often take them to restaurants with us.

We hoped to find a table offering some shade, but many places were full. In the end, we spotted Via Trenta, a restaurant on the corner of 30th Avenue and 37th Street. Virtually all the outdoor seating was open, unlike the other restaurants nearby, and it had a table in the shade at one end of the seating area.  We had dined there once before, though the experience was disappointing. Since not every meal will go the way you want it, we thought it worth a second try and it seemed perfect – out of the way of customers and wait-staff where we could enjoy a quiet brunch.

As we neared the table, a man moved quickly from the front door in a confrontational and belligerent manner informing us we could not bring our dogs in. My wife tried, politely, to explain they were service dogs. He simply said they weren’t while gesticulating with his arms and hands that we get out. She tried once more to show him their identification, but he didn’t want to hear it, exclaiming they were too big. Neither of us had ever been subjected to such vehement behavior at a restaurant and we were stunned. My wife, ever the patient one, reminded him, by law, service dogs could not be denied entry. He continued rudely to say that if we wished to be seated, it would have to be in a designated area of his choosing and pointed to a far-off table on the other side of the restaurant. In every single case over the last nine years, when we have offered Harry and Nana’s IDs, a host or hostess has always been gracious in helping us find a table that worked well for everyone. Except for the person at Via Trenta who exclaimed that it was his restaurant and could do what he wished.

At this point, I told him we no longer had any desire to consider eating at his restaurant; he made a shooing motion for us to leave. My wife said it would be within our right to call the police to state he was violating a statute. He got in her face in an aggressive manner – which was a step farther than I was willing to accept. I said he was behaving like an asshole. This man, whether the owner or manager of Via Trenta launched into my face and threatened me, making a fist with his right hand and motioning he was going to punch me. The comment that I had dared to enter his establishment and call him such a name seemed to serve as his mandate for taking physical action. I stood my ground waiting to see if he would make good on this threat, and my wife opened her cell phone to record the situation rapidly going south. He went inside to make a show of throwing down his glasses and one of his waiters barred the door from him coming back outside. I shook my head in disgust and led Harry back out onto the sidewalk knowing I’d never return, hoping the other customers and passersby would recognize this person for what he is and no longer darken his doorstep.

In the end, we went to Amylos Taverna on Broadway and 34th Street where the hostess brought us to a lovely table that offered a beautiful breeze. The wait-staff served a huge container of water for Harry and Nana and we had a lovely brunch, still stunned that someone could run a restaurant with such disdain for his customers. Harry and Nana have brought so much joy to neighborhood children, have visited the local elementary school to show how animals can be a source of comfort, visited hospitals to lift the spirits of patients there, and countered the effects of daily difficulties by elevating the moods of people wherever they go. Perhaps the owner/manager of Via Trenta would have been better served by seating us than being a glowering primate beating his chest and trying to prove how much of a tyrant he could be.

[Postscript] This from a former employee of the restaurant – verbatim:

The owner was one of the biggest assholes I have ever encountered.
He did almost the EXACT SAME THING to a couple with a newborn once. The baby was asleep in a sling on the mother’s chest. He told them children were not allowed. That was so absurd they began laughing at him. He persisted- telling them it was no place to bring a baby. Again, the baby was ASLEEP. At that point the husband got pretty pissed and said that this was their (his and his wife’s) first day out together since the kid was born and he had ruined what should have been a happy memory. Then they left.
ALSO- my second to last night there as a server he asked me if he could look at my cell phone. I went down to the staff closet and got it and gave it to him, confused. He put it in his pocket and told me I couldn’t have it back until the end of my shift because “women can’t be trusted with cell phones” at work. That was the end of that

Some of the work Harry and Nana perform that brings joy to people’s lives: 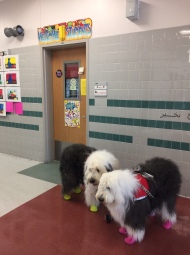 My Tweets
ED A. MURRAY

A place where books and imaginations spring into life

The Mom Who Runs:

Run with me: in life entrepreneuring,💙🌈💙💙mom life, medical missions, through books AND for endorphins

From Islamists, Communists, Collectivists and Nihilists.