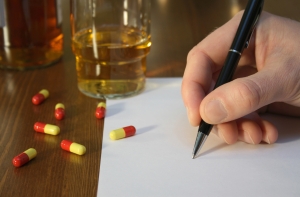 Ten days ago, we reached the end of National Suicide Prevention Week, but the struggle continues.

There are a million reasons why someone sinks to the depths of clinical depression. Blend that with anxiety, and you have a disaster in the making every bit as potent as mixing bleach with ammonia. At any given moment, as you reflect on where you’ve been, there’s darkness. As you look forward, there is only more of the same. What’s behind + what’s ahead = hopelessness. Sometimes that sense of hopelessness, at that particular second of understanding, is enough to convince someone that suicide is not only possible, but desirable. Thoughts of family and friends, passions and daily joys strike against an impenetrable barrier and can’t relieve the mindset.

So, what does it feel like when you stand on that brink? Here’s an example.

Yesterday, as I stood looking up at the beauty of white clouds against a blue sky on a cool, breezy morning – a day that should have been joyous except for the fact I knew the moment would be fleeting before going to a dreaded job full of stress and anxiety – the thought occurred to me that I could actually end it. It would take only as long as receiving an injection and probably hurt just as little, but the pain would be gone. Imagine standing at a table. On it is a piece of your favorite chocolate, or a beautifully cooked steak, or a red velvet cupcake. All you have to do is pick it up and put it to your mouth; the joy of having that desire satiated is magnetic. Then imagine the inner strength it takes to talk yourself out of it. Ask anyone who has been on a diet for several weeks about confronting that temptation. How many resist the indulgence, how many say: well I’ve earned it, so I can treat myself just this once? Multiply that desire by a thousand and you can barely peek through the tiny keyhole of a suicidal individual’s mind at that moment. There is no fear of death – the one thing that keeps most everyone from doing something precipitous doesn’t exist. In fact, thoughts of suicide in that moment elicit an inner smile; peace floods your body with relief. Pulling back from that precipice is Herculean. That’s why 41,149 people killed themselves in 2013, one every 12.8 minutes in our country, and the rate has been climbing steadily since 2000.

I urge everyone to be sensitive to friends and family and co-workers. Watch for the signs. If you suffer from this, get help, see a therapist. If you’re reading this and you’re close to the brink, then go here: Suicide Prevention Lifeline or call 1-800-273-8255. Don’t try to go it alone.

My Tweets
ED A. MURRAY

The Mom Who Runs:

Run with me: in life entrepreneuring,💙🌈💙💙mom life, medical missions, through books AND for endorphins

From Communists and Nihilists.