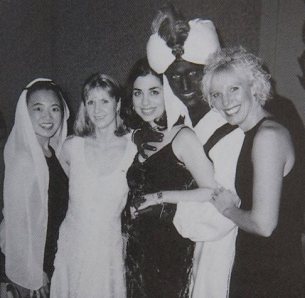 I recently posted on Facebook how frustrating it has become with everyone living in a constant state of being offended, or uncomfortable, or having to walk around afraid to open your mouth in fear of being accused of racism or homophobia or insensitivity…I’m sick of it.

Yesterday, it was reading how To Kill A Mockingbird is being removed from a Biloxi, Mississippi school district because there is language that makes some feel uncomfortable. Seriously? People complain we’re on the fast track to 1984 – the Orwellian world where history and words are changed to suit the need. When we start censoring books and removing them, we’re speeding up the process. Fahrenheit 451 anyone?

Today I see this from the “Good Morning From CNN” news briefs:

“Canadian Prime Minister Justin Trudeau apologized after a photo from his past surfaced on Wednesday. The picture is of Trudeau wearing brownface in 2001. “I shouldn’t have done it. I should have known better, but I didn’t,” Trudeau told reporters. Trudeau was working as a teacher at a private school at the time, and the brownface photo was taken at an end-of-the-year school event with an “Arabian Nights” theme. The Prime Minister said it was a racist photo, but he didn’t think it was racist at the time. Trudeau also said he put on makeup for a high school talent show he once participated in. The controversy couldn’t come at a worse time for Trudeau, who is in the middle of his re-election campaign. Is there any difference between brownface or blackface? They’re both offensive, and here’s why.”

Now, here’s the definition of racism: prejudice, discrimination, or antagonism directed against someone of a different race based on the belief that one’s own race is superior.

The determination of whether an act or a statement is racist goes to intent. There is plenty of intent going around, especially in this country thanks to the lack of leadership from Trump and the hatred taught by myriad members of white supremacist organizations, but that does not mean every single thing a person does or says – such as Trudeau’s use of brown face to enhance his costuming – is a racist act. As mentioned, it was an event with an “Arabian Nights” theme. I don’t see any attempt to promote a belief that his race is superior to the Arab nations of the Middle East. It was not an attempt to demean them or discriminate against them. Disney has done more along racist lines than what Trudeau did nearly two decades ago.

Racism is a serious issue and should be called out and broadcast when it’s found, but let’s save it for the real offenders and not mix stuff into the pot that doesn’t belong. Look for the intent and not paint a picture with the broad strokes of false accusation.